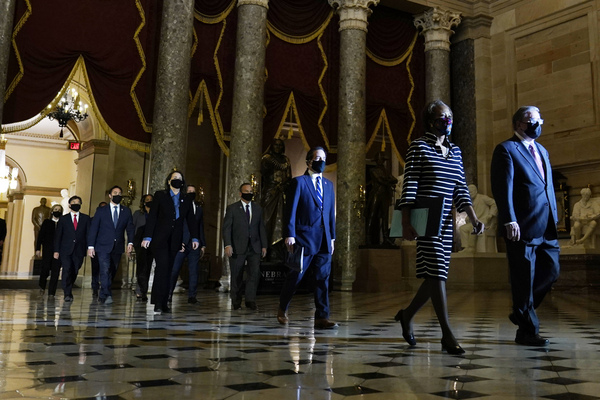 So, who exactly are these impeachment managers we’ll be hearing plenty about over the next few weeks? For one, they’re all Democratic members of the House of Representatives. The nine who were chosen are Jamie Raskin, Diana DeGette, David Cicilline Joaquin Castro, Eric Swalwell, Ted Lieu , Stacey Plaskett, Joe Neguse, and Madeleine Dean.

In short, think of them like the prosecution in a court case. They’ll be arguing the case for why Donald Trump should be convicted.

All of them have a background of some kind in law enforcement or are former prosecutors before they were elected to Congress.

The lead impeachment manager, Jamie Raskin has a rather notable story. In the days before the Capitol Riots, Raskin buried his 25-year-old son. Then he was forced to take shelter from domestic terrorists after he turned up to work to complete the certification of the election. Now he’ll lead the effort to convict the president.

Other notable names include Eric Swalwell, who ran for the Democratic nomination for President and clashed with Joe Biden on the debate stage, David Cicilline, who was heavily involved in Trump’s first impeachment trial and Stacey Plaskett, who is a non-voting delegate from the US Virgin Island and wasn’t able to cast a vote during the impeachment.