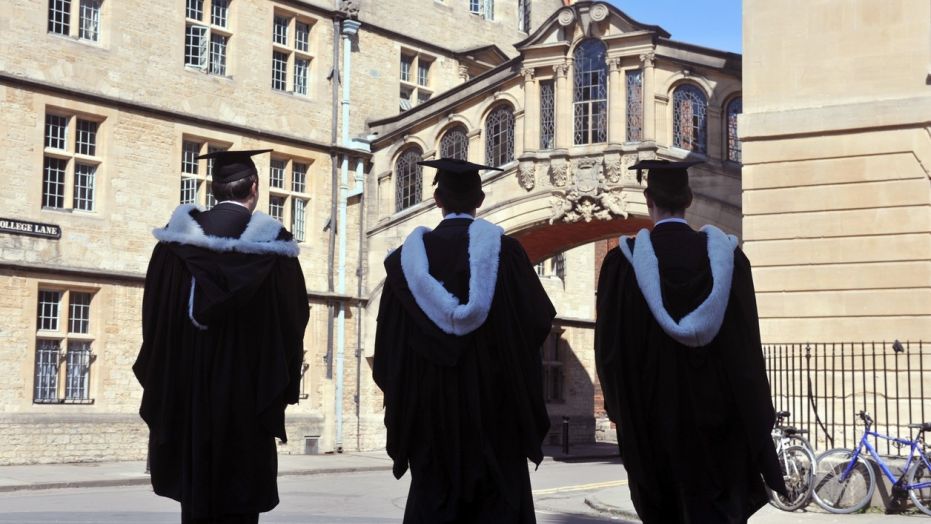 An Oxford University graduate did not abide by the graduation dress code, the school claims.  (istock)

An Oxford University graduate said she was turned away from the commencement ceremony because she was “showing too much flesh.”

In a Facebook post, the graduating student Eleanor Broome writes that she had to run “through the crowded streets” desperately searching for something to cover up her exposed ankles after an administrator barred her from entering the event.

“Today I was refused entrance to my graduation ceremony because I was showing too much flesh.

“The ceremony was due to start in 15 mins so I had to run, in full sub fusc and gown, through the crowded streets round the Sheldonian in a desperate search for black socks. Eventually I found somewhere that sold tights so I had to put them on under my trousers in the fitting room and then sprint back to the Sheldonian.

“Here is a provocative photo of my exposed ankles,” the post says.

Broome said she read her school’s dress code before the event, but thought she would be fine with her black pants and black sandals – the “sub fusc” requires graduates to wear dark formal clothing with black socks or black stockings.

“I read through the regulations before my ceremony, and I thought that black trousers and black shoes would be fine given that these were stated as appropriate sub fusc,” she explains to Yahoo Lifestyle.

“Black socks were also mentioned but I just assumed that this would be for lace-up shoes. I didn’t expect that they wanted us to wear black socks with our sandals or heels,” she added, noting to the Telegraph that it was a “boiling hot July” day and she didn’t want to cover up completely with lace up shoes and black socks.

Once Broome arrived at the Sheldonian Theatre on campus for the ceremony, she said an administrator told her she would not be able to participate.

“I honestly thought he was joking. I even think I laughed and said, ‘I’m sorry, what?’” Broome recalls to Yahoo. “And then he said, ‘Your ankles are not covered, you are showing too much flesh. I cannot allow you in until you get the correct sub fusc.’”

Broome said she left the hall and raced around looking for dark socks or stockings. By the time she found some and got them on, the ceremony had begun.

Though Broome was ultimately able to be part of the graduation, she is angry she was turned away in the first place.

“There weren’t any men refused entry that I saw, it was all of us women in trousers,” Broome said to Yahoo. “I later found out that there were about ten women refused entry at this particular ceremony.”

Another woman who was denied entry was student Rebecca Morton, who said she wore an outfit that she had worn to other graduations at the school.

“I wore the same outfit as I wore to graduation to all eleven of my exams and no university officials raised any issues with it, even though part of the invigilators’ job at examinations is to police subfusc,” Morton said to Yahoo. “As a result I assumed the outfit was fine and wore it to graduation – hence my anger and confusion when I wasn’t allowed into the ceremony.”

Morton said she was also angered by what she calls “misogynistic undertones” of the dress code.

“I was particularly upset by the use of the phrase ‘showing flesh’ by two individual university officials as an explanation for why I was not allowed in,” she says. “Fortunately that phrase doesn’t appear in the dress code, but it and similar phrases have on several occasions that I know of, been offered as the reason for barring entry to female students.”

Oxford University has defended the sub fusc tradition and claims it reminded students of the dress code expectations before graduation.

“The note went out to College Deans of Degrees at the start of summer as a reminder of the dress code for degree ceremonies,” a university spokesperson says, Telegraph reports. “The note was intended to avoid delays to ceremonies, as a courtesy to everyone attending. We are not aware of any significant delays as a result this year.”

Rachel Broome and Oxford University did not immediately respond to Fox News’ request for comment.

Alexandra Deabler is a Lifestyle writer and editor for Fox News.