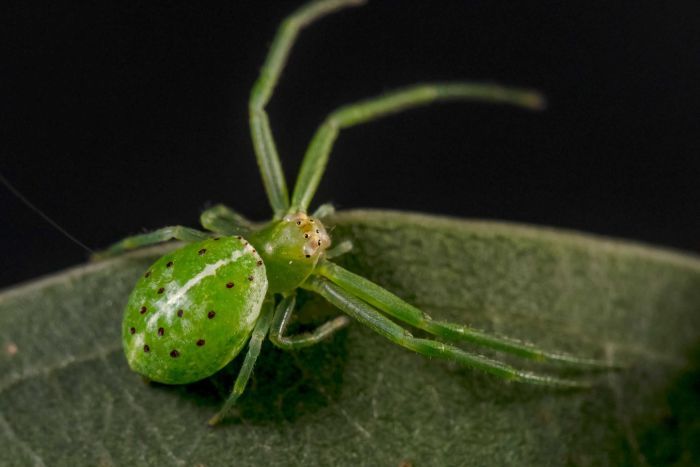 Photo: The crab spider has been declared the “most beautiful” of the 37 new species. (Supplied: Robert Whyte)

Dozens of new creepy crawlies have been discovered on Queensland’s Cooloola Coast in the space of one weekend, and scientists believe there are many more out there waiting to be found.

The thought of 37 new spider species might send shivers down most people’s spines, but for spider expert Robert Whyte, it is exciting.

“People might be alarmed, but these aren’t big hairy spiders. These are tiny little things that look like jewels,” he said.

Mr Whyte said the most interesting was a spider with a body length of just 1.14mm, which was named the Baalzebub after the god of darkness.

Photo: Spider enthusiast Robert Whyte is excited about the new finds, and suggests there is plenty more to discover. (ABC News: Lucy Murray)

The most beautiful was a 5mm “gorgeous bright green crab spider, and when we found that we were pretty happy”, Mr Whyte said.

Its leg structure means it is able to walk sideways like a crab.

While all the spiders have venom to hunt their prey, they are not considered deadly to humans.

“None of them are even remotely dangerous. They’re tiny little gorgeous things that jump around on the foliage,” Mr Whyte said.

Photo: The Baalzebub spider was named because of its dark characteristics. (Supplied: Robert Whyte)

The spiders were discovered during a major stocktake of flora and fauna in the national park surrounding Rainbow Beach in August.

Cooloola Coast BioBlitz organiser John Sinclair said more than 80 scientists and volunteers had spent the weekend shaking trees and sifting through leaves, collecting everything that wriggled or moved.

“It was a great example of citizen science where people who had no expertise were helping people who were experts,” he said.

“Robert would go out with a group of amateurs who were just keen to learn about spiders as much as they could, and they helped him collect the specimen.

“As you start learning more about spiders, you find any sense of arachnophobia just disappears because it becomes so fascinating.”

Photo: One of the major discoveries is believed to be a new Australian spider family. (Supplied: Robert Whyte)

Another important discovery was a new species of Orthobula, which is expected to take the number of Australian spider families from 78 to 79 once it has been verified.

“Before they can be officially recognised by the world spider catalogue, they have to be in a scientific paper in a respected journal which is peer reviewed,” Mr Whyte said.

“I actually was pretty gobsmacked that we got so many new species in such a short time, and it really does indicate it’s very rich ecologically in that area.”

Plans are underway for another BioBlitz on the Cooloola Coast in May.

“The 37 new species is just a fraction of the ones that were there,” Dr Sinclair said.

“There’s many more waiting to be discovered. We’re hoping to add to that list when we do the next BioBlitz in May.”

Dr Sinclair hopes the new discoveries will help get the Cooloola Coast added to the World Heritage List.

“Cooloola is one of the richest areas for biodiversity on the Australian continent,” he said.

“We’ve just got so many different types of habitats, from rainforest to mangroves to big dune fields, and it makes an excellent area for study.

“It’s already on the tentative World Heritage List and we’re hoping it can elevate its priority so finally Cooloola can be properly recognised.”