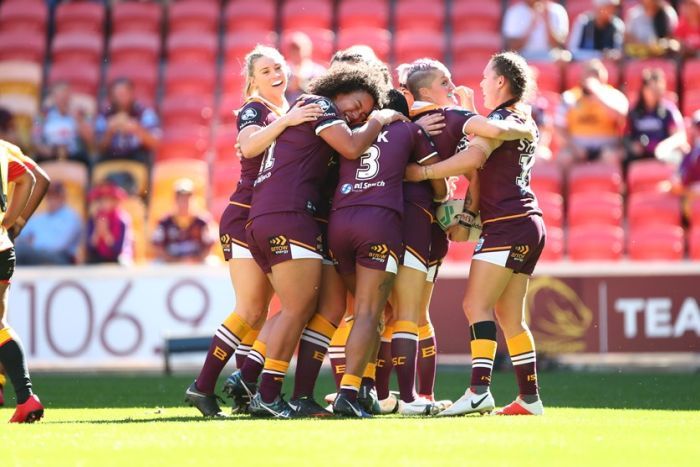 Photo: The inaugural NRL Women’s Grand Final this Sunday will be a game-changer for the sport. (www.broncos.com.au)

When women like Heather Ballinger run out into the ANZ Stadium for the inaugural National Rugby League Women’s (NRLW) Grand Final this weekend, there’s so much more than bragging rights on the line.

The NRL’s slogan for its very first women’s premiership has been: “It’s the Same Game. Our Way”, but for the past 30 years that has been far from the case.

Brisbane Broncos prop Heather Ballinger debuted for the Jillaroos in 2011, but said it has taken decades of sacrifice to get the women’s game to where it is today.

Photo: Heather Ballinger said it’s taken decades to get the women’s game to where it is today. (ABC News: Brittney Kleyn)

“At the end of the day we never complained about it, because that’s what we really wanted to do,” she said.

“You spend a lot of money to be where you want to be, to put all that aside and be able to throw on the jersey, well that means everything to the girls.”

It also means the world to Annie Banks, who has been a key player in the development of Australian Women’s Rugby League for 21 years.

She said women’s sport has become “a beast that can’t be ignored”.

“We did envisage this a long time ago in hope. It’s unbelievable that it’s actually happening,” she said.

“It’s just the early days of the concept of seeing all these very talented women out there, you’ve got this incredible pool of athletes.”

Tahnee Norris, whose credentials are unrivalled, is one athlete who has put in the hard yards, representing Australia in four world cups and has played elite rugby league for 15 years.

The former Jillaroos captain said when she started out in her 20s, pathways into competitive rugby league were “pretty much non-existent”.

“I grew up playing rugby league in the backyard with my brothers but I was a netballer back then and rugby league wasn’t seen as one of the things that women actually played back in the day,” Ms Norris said.

“I can’t wait for the time when there’s actually the full spread of the clubs that are actually involved in the NRL and the girls are getting paid more and it becomes the professional sport like it should be.”

From caravan parks to live TV

Tahnee Norris recalls sitting in the stands with the NRL’s top brass in 2013, when the Jillaroos claimed their very first World Cup in Great Britain.

“It was the start of it all. They saw that it was a quality game of footy that needed to be shown out there and once we got it shown, it’s all just steam rolled from there,” she said.

“It used to be the family and friends that go along to the game early to sit in the stadiums when no one else was there.”

Photo: Tahnee Norris says the 2013 World Cup “was the start of it all”. (Supplied: Jo Barrett)

She said even that was a stretch at times — in 2014, the Women’s Australian All Stars took to the field with the Indigenous All Stars and played for seven minutes before the stadium gates even opened.

Heather Ballinger said the recognition for the women’s game has come a long way since then.

“From playing on a football field out the back of a club, to early hours of the morning before the men’s, to now being on the main show on a nice carpeted football field compared to a brick, it’s changed dramatically,” she said.

Former Jillaroo Jo Barrett will be cheering from the stands this weekend and said the curtain raiser to the men’s game was a world away from where she started.

“Some people have asked, do we get jealous or do you feel a bit bitter and twisted that you missed out, but you never wanted anything you’re involved in to stay where it is?” she said.

“It’s humbling but it’s really exciting for the future of the game. I hope it normalises it, that’s where I’d like it to go.”

Photo: This year all the women’s games were telecasted live. (AAP: Daniel Pockett)

‘We want to put quality out there’

All five teams have been given five-year licences, although the consensus among players and development staff alike, is they don’t want the NRLW to grow too quickly.

Annie Banks said: “right now we’ve got to put our best players forward and for that to happen you’ve got to make sure your talent identification is line with your progression”.

Tahnee Norris agreed, saying they had to be smart about how they grow in the future.

“Not expanding too early is really important,” she said.

Either way, Heather Ballinger said this weekend’s inaugural grand final was set to be a game changer.

“We want to put quality out there, we want to keep people interested, we want to grow that game,” she said.