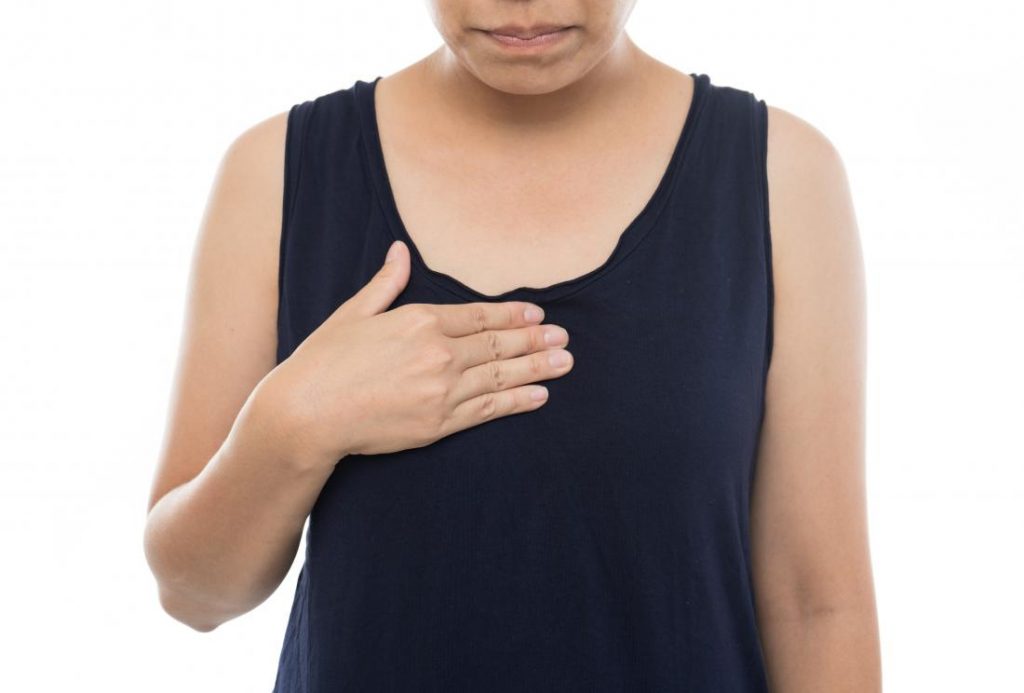 Acid reflux is very common, and other symptoms may include vomiting, bad breath, tooth erosion, and a bitter or sour taste in the back of the mouth.

Acid reflux occurs when the valve between the food pipe and stomach, known as the lower esophageal sphincter (LES), fails to close properly after eating, which allows stomach acid to leak up into the food pipe.

Frequent or prolonged acid reflux can develop into a more severe form of reflux known as gastroesophageal reflux disease (GERD).

Several scientific studies have found an association between obesity and GERD. Although the reason for the association is unclear, researchers believe that the increased abdominal pressure that occurs due to weight gain may cause the LES to relax, resulting in stomach acid leaking up into the food pipe.

A 2013 study investigated the effect of weight loss on GERD among overweight and obese adults. Of the 332 participants who took part in the study, 37 percent reported experiencing GERD symptoms.

After completing a 6-month structured weight loss program, 65 percent of these participants reported that their symptoms had completely resolved. A further 15 percent noted a partial improvement in their symptoms.

Many people report that specific foods can trigger acid reflux and heartburn. These triggers will differ from person to person, but some common examples include:

A 2014 study found that people with GERD tended to experience more severe symptoms after eating foods that were fatty, fried, sour, or spicy.

Sour foods contain high levels of acid, while spicy foods contain a chemical called capsaicin. Both of these can irritate the food pipe.

Fatty foods contribute to GERD symptoms by interfering with the LES and slowing digestion in the stomach.

People with acid reflux may benefit from keeping a food diary. Doing so can help them identify individual foods that trigger symptoms. Keeping note of meal and snack times may also highlight eating patterns that contribute to reflux episodes, as per below.

Studies suggest that a person should eat smaller portions to reduce GERD symptoms.

A 2014 study compared the dietary habits of people with and without GERD.

While all participants usually ate three meals a day, those with GERD skipped a meal significantly more often than those without GERD.

Participants with GERD were also more likely to have one large evening meal than to divide their calorie intake more evenly between lunch and dinner. Large meals increase the amount of food that the stomach needs to digest, which may worsen acid reflux.

The researchers recommend eating at least three meals a day to both prevent and treat GERD. Eating four or five smaller meals may be even more beneficial.

Raising the head of the bed

Some people experience a worsening of acid reflux at night. This type of acid reflux is known as nocturnal gastroesophageal reflux or nighttime reflux, and it can negatively impact a person’s sleep.

Medical experts think that lying down after a large meal can contribute to acid reflux because it is easier for the contents of the stomach to flow back into the food pipe when a person is not in an upright position.

A small 2014 study investigated whether elevating the head of the bed by 20 cm would improve symptoms in 20 people with nighttime reflux.

After 6 days of sleeping in the raised position, participants experienced a significant reduction in nighttime reflux, and 65 percent also reported a decrease in sleep disturbances.

The International Foundation for Functional Gastrointestinal Disorders (IFFGD) recommend that people who regularly experience nighttime reflux try inserting a triangular wedge underneath the head of the bed. This elevation should keep their food pipe raised above their stomach during sleep.

Eating late at night may increase the likelihood of nighttime reflux.

A 2013 study investigated the relationship between different eating patterns and GERD. Researchers found that eating meals closer to bedtime was associated with an increase in GERD symptoms.

According to the IFFGD, stomach acid production is highest during the first 3 hours after eating. Another 2013 study in people who had received treatment for acid reflux found that the participants were more likely to experience a recurrence of symptoms if they ate less than 3 hours before bedtime.

For some people, alcohol can be an acid reflux trigger.

According to the IFFGD, alcohol causes heartburn by:

However, a large-scale scientific study found that several other lifestyle factors, including poor sleep quality and irregular dietary habits, were stronger risk factors for GERD than alcohol. A 2013 review concluded that there was insufficient scientific evidence to show that reducing alcohol intake improves symptoms of GERD.

However, people who find that alcohol triggers or worsens their acid reflux may find it beneficial to reduce their intake.

According to a 2016 review, tobacco smoking may contribute to acid reflux by:

The review found that giving up smoking led to a decrease in severe GERD, but only in individuals of a healthy weight. Participants who were overweight or obese did not show the same reduction in symptoms, despite quitting smoking.

However, the researchers still recommend that all people with GERD quit smoking.

When to see a doctor

The American Gastroenterological Association (AGA) advise people to see a doctor if symptoms of reflux persist or worsen over the course of a few weeks.

According to the AGA, people should see a doctor immediately if they experience any of the following symptoms:

Any of the above symptoms could indicate a potentially life-threatening health issue that requires urgent medical attention.

Acid reflux is common and occurs when the contents of the stomach travel back up the food pipe. Frequent or prolonged acid reflux can lead to a more severe condition known as GERD.

Some home remedies and lifestyle tips can help reduce or prevent acid reflux. These include losing weight, keeping a food diary, eating regular meals, and raising the head of the bed.

Anyone who experiences acid reflux for more than a few weeks should see a doctor.