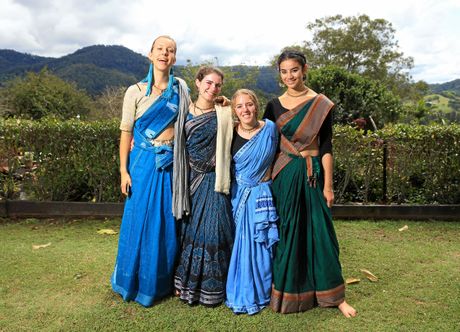 WHILE most Year 12 students plan a week of partying at Surfers Paradise to mark the end of their school years, seven students from the Hare Krishna School at Eungella are planning something completely different.

Instead of heading to Schoolies, the students will travel to India to take part in a pilgrimage and mark the end of their school life.

But don’t be fooled. This group of teens is just like any other, with dreams of becoming famous musicians, hosting their own Fortnite YouTube channel and becoming millionaires by the age of 30 all on the agenda.

On Thursday the students celebrated their graduation from the Hare Krishna School, becoming the first cohort of Year 12 graduates to do so.

“These are historic students for the first time to graduate with Year 12. We follow the Australian curriculum and the students are exposed to all of the academic requirements needed in order to meet the requirements of the HSC course.

“In addition to the HSC requirements, we have a spiritual aspect of their education where they learn about Krishna consciousness and other religions as well and what it means to be a spiritual person in this modern day and age.

“On top of this, we put a lot of energy into teaching and learning about values and character development. So each student gets lots of mentoring in terms of their life and dealing with challenges, and that usually happens with either individual teachers they feel comfortable with or there are special classes we organise for them.”

Ms Shyami said as a group, the students had organised a trip to India themselves, with plans to fly out of Australia the day after they complete their final HSC exam to mark their big milestone.

“As a group they have worked for their tickets, they have paid for their own tickets and they are going on a six-week trip to India and Bali on their own,” she said.

Year 12 student Rasa said she was very much looking forward to the trip.

“I’m so excited, we are all going to have a gap year next year because there are so many places we want to go,” she said.

“We will maybe come back to the school and help out as teacher assistants, while Tulasi is going to be a teacher here.”

Rasa, who went to a ‘normal’ school at primary level, said she had enjoyed the “depth” of learning and the relationships she had forged with her classmates at the Hare Krishna School.

She plans to head to university with classmate Premanjali after their gap year.

“The environment we have had while growing up in this school is so significant. Everyone has been taught more than just the syllabus. We have had a great focus on developing values and principles and morals we can carry with us throughout life.

“We have had an amazing group, where we understand each other really well and are able to go into the world and know everything is as it should be and we can live our life based off those values.”

Meanwhile Balaram, who grew up in Russia before his family moved to the Hare Krishna Farm some six years ago, has big plans to become a musician and DJ in Melbourne next year, where he plans to incorporate his knowledge of Indian instruments with his love of contemporary dance music.

His fellow classmate, Gour, is already channelling his love of video games by hosting his own Fortnite channel on YouTube, and has also set his sights on competing on the world stage in athletics, with the 800m race his favoured event.