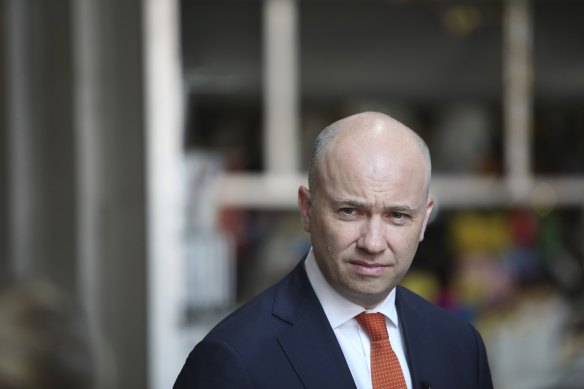 Northern Beaches councillor Rory Amon announced his intention to seek Liberal preselection for the seat of Pittwater, which is held on a 20 per cent margin.

Stokes said it was now time to “make room for a different perspective and a new voice for Pittwater”.

Perrottet praised Stokes for his time in parliament, describing him as a champion for reform.

“I would like to thank Rob for his important and significant contribution to public life and our state, and I wish him, his wife Sophie and their children all the very best for the future,” Perrottet said.

Treasurer Matt Kean on Friday said Stokes had made a substantial contribution to the Liberal party and NSW, describing his departure as a huge loss.

Kean said Maclaren-Jones was a “lifetime Liberal” who would make an “outstanding” member for Pittwater.

He rejected any suggestion the party was suffering a mass exodus, instead describing the turnover and “new blood” as a strength for the government as it seeks a fourth term in office.

Kean said that he had encouraged Ward to put her hat in the ring for Davidson, adding that she was “a future premier.”

Pittwater is among a swathe of traditionally blue-ribbon Sydney seats that could be targeted in the March poll by environment-focused independents, who have mobilised following the success of teal candidates at the federal election.

Earlier this year Stokes told the Herald he believed the Liberal Party should adopt the platform of teal independents in 2023 to ward off challenges from independent candidates.

Volunteer group North Sydney’s Independent has launched its search for candidates to support in the seats of Lane Cove, held by Planning Minister Anthony Roberts, and North Shore, held by Felicity Wilson.

Independent campaign groups are also mobilising in Pittwater, Wakehurst and Manly ahead of the election.

Optional preferential voting in NSW will make it more challenging for independents to emulate the success of the federal campaigns, where many relied on preferences to get them over the line.

The Morning Edition newsletter is our guide to the day’s most important and interesting stories, analysis and insights. Sign up here.