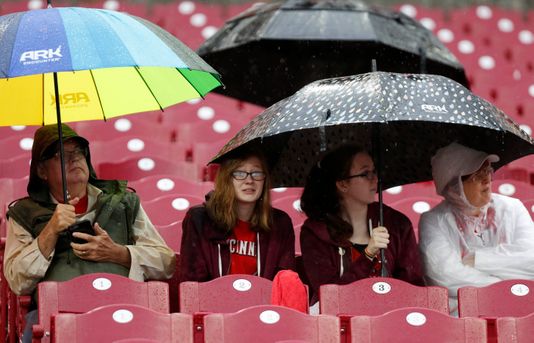 Fans sit under cover during a rain delay during a game between the San Diego Padres and the Cincinnati Reds.(Photo: David Kohl, USA TODAY Sports)

A dramatic finish to the Major League Baseball season – with five National League teams vying for three playoff positions – can’t reverse a season-long trend of attendance loss, with baseball poised to see its first significant decrease in a decade.

Seventeen of 30 teams will see a dip in attendance – eight of them reporting losses of 12% or higher.

In the nine seasons that followed, average attendance landed in the 30,000 range, until this year.

And why is that?

Commissioner Rob Manfred has maintained that poor weather early in the season is largely responsible, and it’s a valid explanation. Entering the final weekend, 52 games have been postponed due to weather – the most in MLB since 1997, when 53 games were postponed. By April 24, 28 games were lost to postponements, creating an arrhythmic start to the season and forcing teams into makeup dates on weekday afternoons later in the year.

Yet, weather can’t account for all of it. After all, the AL and NL teams that saw the biggest drops – Toronto and Miami, respectively, play in stadiums with retractable roofs. That didn’t prevent the Blue Jays’ 27% drop, to 29,066 per game, and the Marlins’ staggering 51% drop, from 20,395 to 10,014 following a winter sell-off. (Their drop also can be partially attributed to the club’s adjustment in reporting attendance, as they no longer include giveaways or tickets deeply discounted.)

Indeed, many underlying reasons can be traced to competition – or lack thereof. A look at several forces beyond Mother Nature that could explain the state of the fan and why he or she showed up, or stayed away, in 2018:

Fair or not, “tanking” has become an oversimplified phrase to describe a spectrum that can include rebuilding, executive ineptitude and, yes, intentional non-competitiveness. Call it what you will, but it’s fair to say teams signaling a pivot to re-tooling feel it at the box office.

The Marlins, of course, are the most extreme example, with an ownership change that preceded the trade of star outfielders Giancarlo Stanton (the reigning NL MVP), Christian Yelich (the 2018 NL MVP favorite) and Marcell Ozuna. Miami also was coming off a season in which it hosted the All-Star Game, often a lure to keep season-ticket holders engaged.

The other clubs experiencing at least a 12% dip at the box office include a team posting its fourth straight season of at least 93 losses (Reds), another that’s already suffered a franchise-record 112 losses (Orioles), a 102-loss team that’s also tumbling from a period of success (Royals), a longtime contender that commenced an overdue rebuild (Tigers) and another traditional winner bound for consecutive losing seasons (Rangers).

The only winning club on the list are the Pirates, who at 80-77 loitered on the fringes of the wild-card race far longer than many anticipated. But the off-season trades of former All-Stars Andrew McCutchen and Gerrit Cole prompted a significant fan backlash – an online petition signed by more than 50,000 fans urged owner Bob Nutting to sell the team.

While those emotions often abate by Opening Day, the disenchantment apparently was real: Pittsburgh’s average attendance of 18,786 is its lowest since 1996, when an average of 16,651 came through the Three Rivers Stadium turnstiles.

Intent doesn’t equal filled seats, however, when the season turns sideways. Baltimore hung onto free agents-to-be Manny Machado and Adam Jones and spent $57 million on free agent starter Alex Cobb. But an 8-27 start buried the Orioles before school was out, and the club will see a fourth consecutive attendance drop in a market more tenuous than many.

Toronto, too, held onto Josh Donaldson, but the 2015 MVP played in just 36 games and years of raucous crowds at Rogers Centre faded along with the Blue Jays’ window of contention.

While not every eight- or nine-figure deal reaps benefits, this season does to a degree burnish his contention.

The three teams that saw double-digit attendance gains – the Astros, Phillies and Brewers – all made significant off-season transactions and contended deep into September. The Astros also enjoyed the bump a defending World Series champion always receives.

Only the Chicago Cubs spent more on free agents than the Phillies’ $170 million, an outlay that netted them starter Jake Arrieta ($75 million) and first baseman Carlos Santana ($60 million) and signaled an intent to contend after a two-year rebuild.

The Brewers, traditionally austere, spent $80 million on outfielder Lorenzo Cain and significant prospect capital to acquire Yelich from the Marlins. Wednesday, they clinched their first playoff berth since 2011. Perhaps most impressively, their boost in attendance came on top of an already solid 2017 average of 31,589.

The upshot? Money doesn’t always buy victories – but at least it lets your base know you’re in it to win it.

Even for contenders, drawing crowds is a challenge once the kids go back to school. The Atlanta Braves, surprise champs of the NL East, drew just two of their top 20 crowds in September. The Colorado Rockies, in a spirited run for their first NL West title, have drawn four of their nine worst crowds this month.

Little surprise, then, that teams like the 68-91 Reds would see their average gate in September drop to 15,000 from a season-long average of nearly 20,000.

Like the weather, baseball’s final month is a conundrum MLB can’t easily solve. Yet, it stands to reason that having fewer than eight 90-loss teams might help.

No, this is not a meditation on baseball’s imminent demise. Defensive shifts, “bullpenning,” long games, too many strikeouts, expensive tickets, plentiful inventory on the secondary market, nacho cheese hardening after five innings – sure, all could be plausible reasons why fans stay away.

Yet while the overall numbers aren’t encouraging, it should be noted that nine clubs – the Angels, Red Sox, White Sox, Dodgers, Cardinals, Cubs, Braves, Nationals and Padres – had virtually flat attendance numbers, with gains or losses of 2% or less. In this sports and entertainment climate – where food, beer and HD screens always are cheaper and better at home – flat is the new up.

That’s not to say baseball should ignore this drop. Cheaper tickets, flexible season-ticket plans and further embracing of technology to enhance the in-house product – all will be necessary to stem the tide and perhaps regain what was lost.