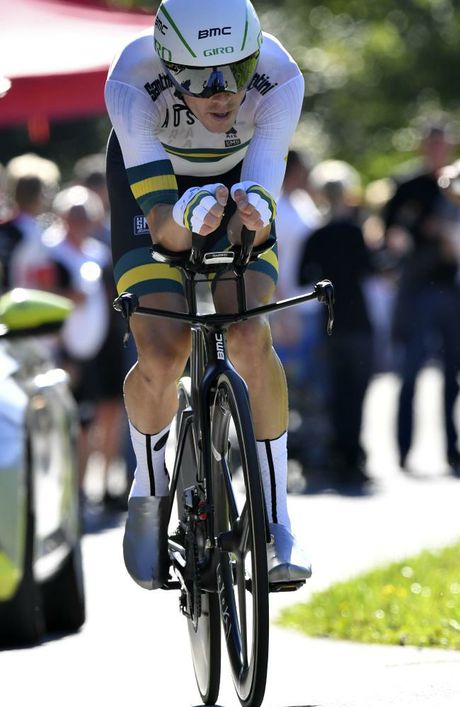 After years of bad luck including equipment failure and crashes at major Games and world championships, Dennis put it all together in the 52.5km race against the clock to win by 1min 21secs from Dumoulin and Belgian Victor Campenaerts.

Dennis is only the second Australian to win the event after Michael Rogers did the three-peat from 2003-2005 to be crowned king in what is known as ‘the race of truth’.

The signs were good when the 28-year-old from Adelaide won both individual time trials at the Vuelta a Espana earlier this month and he was able to carry that form to Innsbruck where he crushed the course which included a major climb towards the finish.

He destroyed his rivals, leading at every checkpoint and even managing a smile as he crossed the finish line.

“I can’t explain it, it’s an amazing feeling,” Dennis said.

“I was being coached from the car by Brad McGee and he gave me confidence at the top of the climb that I was a minute up on Dumoulin and just kept me calm.

“I was considering a bit of a victory salute but I wanted to make sure of it.

“There are a lot of people I have to thank for this and the first one is my wife (Melissa) who’s back home and I’m sure she’s pretty happy at the moment.”

“It’s a dream come true obviously being world champion, I’ve been chasing this since I was a junior, I’ve never won it in any age group so to win it as a senior is pretty special.”

Standing on top of the podium was a long time coming for Dennis who had finished 8th, 6th, 6th, 5th and 12th in the past five years.

He looked headed for a medal in Norway last year only to crash in the closing stages and finish eighth, while in 2016 he was sixth and weeks earlier at the Rio Olympics he was fifth after having to stop and change bikes when his handlebars snapped mid-race.

The closest he’d previously been to a gold medal in the time trial at a major event was second at the 2014 Glasgow Commonwealth Games and second in the under-23s at the 2012 world championships.

Dennis won two world championships on the track but this was his first world title on the road.

He has long been one of the best time trialers in the world and in 2015 wore the yellow jersey at the Tour de France after winning the opening stage prologue.

But the swimmer-turned-cyclist has also made no secret of his desire to transform himself from time trial specialist into Grand Tour contender in coming years and has been working on his climbing while trying to retain his raw power.

Dennis, who won the Tour Down Under and broke the hour record on the track in 2015, is expected to race in Australia over summer with new team Bahrain-Merida.