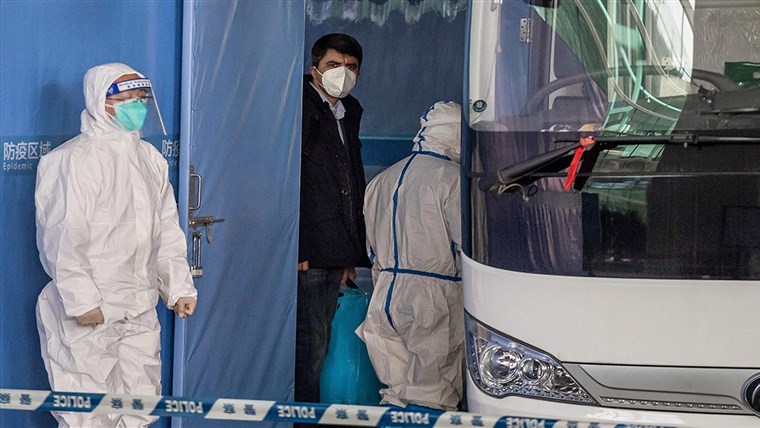 A team of scientists from the World Health Organization is in China investigating mysteries of the pandemic more than a year after it broke out: where the coronavirus came from and how it spilled over into humans.

The long-awaited trip, initially hampered by delays by China, has started what could be a lengthy process of piecing together the virus’s origin to answer key questions about the pathogen and how to prevent similar — and possibly worse — future outbreaks.

But the world will be watching the results of the investigation — and China’s willingness to cooperate will also be the focus of intense interest around the world.

That the trip is happening more than a year after the virus was first identified has stoked concern that the government has not been transparent in its handling of the virus. And political quarrels have emerged, particularly between China and the United States, with the Trump administration assigning blame on China for the pandemic. Fifteen members of the WHO delegation of scientists were set to arrive in China but two were denied entry after testing positive for coronavirus antibodies, and will remain in Singapore, according to the world body.

While many researchers stress the need for science, and not politics, to guide the WHO’s work, experts warn they will have to navigate a political quagmire.

“The objective of the investigation is not to designate a guilty country or authority,” said Yanzhong Huang, a senior fellow for global health at the Council on Foreign Relations and a professor at Seton Hall University’s School of Diplomacy and International Relations. “But we also have to be realistic: This is a very politicized world, and if the research suggests China is the origin point of the outbreak, that hypothetical finding could indeed be used as smoking gun evidence to support claims that China is guilty.”

China faced heavy criticism for allegedly downplaying the severity of the initial outbreak of the mysterious, pneumonia-like illness in late December 2019, and for not acting quickly enough to alert the WHO of evidence of human-to-human transmission.

Download the NBC News app for breaking news and politics

The suspicion about China’s handling of the outbreak came after its problematic response to the 2003 SARS pandemic, when it was found that Chinese officials had suppressed and deliberately withheld information from the public. The WHO praised China early for its efforts to contain the Covid-19 outbreak, but questions still remain about where and how the pathogen emerged.

The WHO investigation is taking place against the backdrop of China’s efforts to tightly control information about the pandemic. Last month, a Chinese court sentenced a citizen journalist to four years in prison for reporting on the early outbreak in the city of Wuhan independent of state-controlled media.

Reports also emerged last year that a 34-year-old doctor named Li Wenliang was punished by police for warning about the virus on the messaging app WeChat in December 2019. Li died of Covid-19 a few months later, and after a wave of criticism, the government took disciplinary measures against the police officers involved and posthumously hailed him as a “martyr.”

Few details about the WHO’s visit have been made public, but one focus of the investigation will likely be to establish a timeline of events and determine where there are still gaps in knowledge, said Dr. Dale Fisher, chair of the Global Outbreak Alert and Response Network, which was established by the WHO to respond to infectious disease outbreaks.

Fisher, who is not involved with the current investigation, was part of a WHO mission that visited China in February 2020 to assess the rapidly evolving outbreak. During that trip, the team traveled to Wuhan, in Hubei province, where the virus is thought to have emerged and the researchers subsequently published a 40-page report detailing what was known then about how the coronavirus spreads and how it could be contained.

At the time, the WHO was itself criticized for not doing enough to warn the rest of the world about the coronavirus and for being overly reliant on information coming from Chinese officials. In May, President Donald Trump accused the WHO of being a “puppet of China,” and announced that the U.S. would withdraw its funding for the agency.

Within hours of his inauguration, President Joe Biden had signed an executive action to rejoin the WHO.

While WHO scientists say they hope that Chinese scientists will be forthcoming, Beijing is known to have controlled information about the coronavirus.

According to an investigative report published by The Associated Press in December, the ruling Chinese Communist Party has clamped down on research on the virus’s origin, mandating that any findings must be approved by a task force that reports directly to President Xi Jinping. NBC News has not confirmed the AP’s reporting.

“China does have an incentive to investigate the origins of the outbreak, not just to help end the current pandemic but also to prepare for the next one,” he said. “But that research is government-sanctioned, which raises concerns about the extent that they are willing to share that information with the WHO.”

The Chinese government’s track record of secrecy has fueled theories that the virus may have leaked from the Wuhan Institute of Virology, a prominent research facility that was the first in China to receive the highest level of biosafety clearance. No credible evidence has been found to support such claims, but the researchers traveling to China this week said their objective is to follow the science.

“If that’s where the investigation brings us as a hypothesis, then we won’t rule that out,” Marion Koopmans, a Dutch virologist who is a member of the WHO delegation, said of the possibility that the virus may have leaked from a lab.

Most research to date on the coronavirus’s origin has focused on a seafood market in Wuhan, which was linked to some of the earliest known cases of Covid-19. But Koopmans said it’s also possible that the virus originated elsewhere in China.

“I think it’s likely that Wuhan was a superspreading event,” she said, adding that some cases identified in early December had no discernible ties to the seafood market. But, she said, the team will investigate a number of different hypotheses.

After clusters of Covid-19 were reported in Wuhan and evidence emerged that the virus was spreading among humans, China placed the sprawling city of 11 million people under a strict lockdown Jan. 23, 2020.

A year later, after reporting nearly 99,000 cases and more than 4,800 deaths, China has managed to keep the virus relatively contained, though a new lockdown has been imposed in Hebei province, near Beijing, after the region saw a spike of new infections since Jan. 2.

In the U.S., meanwhile, more than 420,000 people have died and more than 25 million cases have been reported.

In many ways, the crisis in the U.S. has increased the stakes for China domestically, particularly after the government experienced backlash from its own citizens early in the pandemic for mishandling the response, said Bonnie Glaser, a senior adviser for Asia at the Center for Strategic and International Studies, a think tank headquartered in Washington.

“There was a period of several months in China where it was clear that people were criticizing the government, and the Communist Party worked very hard to get that narrative under control and change it into a positive one,” she said.

The level of dissent was unusual and came primarily from younger Chinese people who “crossed a dangerous line in China” by questioning the government’s legitimacy, she added.

Since then, most cities in China have more or less returned to normal and there are signs that the economy is rebounding, though experts have cautioned that the actual number of Covid-19 cases and deaths in China may be much higher than what the government has officially reported.

“The narrative today is that China was successful at preventing the spread, and has been far more successful than the U.S. and other democracies around the world,” Glaser said.

Still, the WHO probe will force the Chinese government to juggle protecting that narrative domestically with defending the country’s international reputation, according to Huang of the Council on Foreign Relations.

“The WHO does have leverage because it’s important for China’s global health diplomacy,” he said. “The last thing China wants is to publicly quarrel with the WHO, because that would look bad diplomatically and politically.”