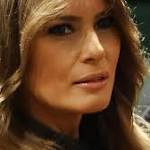 Greater fashion minds than I could probably describe it in more detail than that.

Let’s see. The dress was sleeveless, in keeping with America’s second amendment, which gives citizens the right to bare arms.

There were little pockets all over it, each emptier and more pointless than the last.

Was it chic? I think it was chic.

Sorry, I’m trying to make the dress sound interesting, because heaps of people are talking about it.

Here is some photographic evidence.

Melania was joined by her husband Donald, in his favourite oversized suit ensemble. The President resembled a teenage boy who decided to wear his father’s business suit and tie to the year 10 school formal because he was too busy playing Fortnite to bother finding something more fitted.

The occasion for this festival of high fashion was Donald’s speech to the United Nations, where he talked about how great he was and the global dignitaries in attendance presumably wondered what his overlong tie was compensating for.

Meanwhile, internet sleuths around the world were trying to decipher the hidden meaning in Melania’s aforementioned, wholly unremarkable outfit.

They decided her choice to wear black was a sneaky homage to the #BelieveSurvivors movement, which is urging people to don the colour in solidarity with a woman called Christine Blasey Ford.

Dr Ford has accused Donald’s nominee for the Supreme Court, Judge Brett Kavanaugh, of sexually assaulting her when they were in high school. Her disturbing but unproven allegation is the cause of a monumental political headache for the President.

So you see, Melania was secretly trolling her husband when she wore that dress today. Or so the conspiracy theory goes.

The first lady can hardly be seen in public without someone spotting a clue that she secretly despises Donald.

Shall we run through some examples?

At his inauguration in 2017, cameras witnessed Melania’s smile abruptly disintegrating into an expression of ice cold indifference the moment Donald turned away from her.

Was it an outward symptom of the bottomless pit of existential dread Melania feels every day as she endures his continued presence in her life? Possibly. I’m not a psychologist.

On the other hand, maybe she was just bored and miserable, because it was cold and wet and, let’s face it, I’ve sat through long lectures on theoretical linguistics that were more exciting than a presidential inauguration.

At one of the 2016 presidential debates, a few days after the infamous “grab ’em by the pussy” tape was leaked — I won’t make you relive the details of that, because you’ve probably just eaten — Melania wore something called a “pussy bow blouse”.

She publicly supported her husband, insisting the creep we all heard boasting about sexual assault on tape was not the real Donald. But hey, why believe Melania’s words were a fair reflection of her views? After all, her top did have a bow on it. Think about that.

It isn’t just about Melania’s clothes either. Some people genuinely believe the first lady has a secret body double who fills in for her when she can’t stand to be seen with Donald in public, because apparently her face sometimes looks weird.

Guys, look in the mirror. My face looks weird. Your face looks weird. We’re all funny looking. It doesn’t mean we each have an evil twin who breaks out and roams the Earth in our stead every time we take a sick day.

I suppose what I’m saying here is enough with the Melania Trump conspiracy theories already.