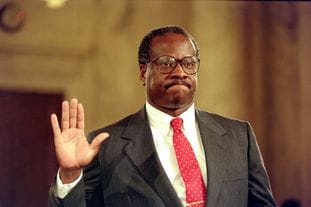 Clarence Thomas is sworn in on September 10, 1991, at his Supreme Court confirmation hearings before the Senate Judiciary Committee. (J. David Ake/AFP/Getty Images)

As sexual assault allegations mount against Supreme Court nominee Brett M. Kavanaugh, the country finds itself remembering a similar situation: When Anita Hill accused then-Supreme Court nominee Clarence Thomas of sexual harassment in 1991. That memory grows even stronger with Thursday’s testimony by Christine Blasey Ford, the California professor who has accused Kavanaugh of sexually assaulting her when she was 15 years old.

As “Saturday Night Live” prepares to kick off its 44th season Saturday, Ford’s testimony raises the question of how the show — which traffics in political satire and has been especially topical during the Trump era — will address the thorny issue.

During the Thomas hearings, shows as wide-ranging as “Murphy Brown” and the family-friendly “Dinosaurs” addressed the Hill allegations with varying degrees of obfuscation, but SNL faced them head-on.

One cold-open in particular attracted attention: an Oct. 12, 1991 send-up of the hearings in which the Senate Judiciary Committee essentially mocks Thomas for not getting a date with Hill, before swapping progressively appalling and boorish techniques to pick up women.

Many have praised the sketch as politically biting, and it’s ended up on a few “best of” lists — including a list Al Franken wrote for The Washington Post of his personal favorites. (Franken resigned from the Senate earlier this year over sexual misconduct allegations.)

But in the #MeToo era, the sketch might be seen by some as problematic in that it “reduces the whole issue to gags about sex,” as Allison Yarrow wrote in a November essay for The Post.

Longtime SNL writer Jack Handey, who conceived of the sketch, told The Post via email that it “was one of those rare occasions when the idea just hits you like a bolt from the blue.”

Handey, known for his “Deep Thoughts” interstitial sketches, was standing in executive producer Lorne Michaels’s office for the show’s weekly pitch meeting when “the idea for the Clarence Thomas hearing sketch suddenly came to me. I laughed and blurted it out. People liked it, so I took charge of it.”

“The idea,” he added, “was that the senators would question Clarence Thomas to find out how to pick up women.”

“Professor Hill, I want to thank you for your patience today,” he begins. “You’ve shown remarkable courage throughout your testimony. It couldn’t have been easy for you, or any of us, to sit here for the last seven hours and talk about penis size, or large-breasted women having sex with animals, or pubic hairs on soft drink cans, or oral sex, or the black man’s sexual prowess, or large-breasted women having sex with animals. But we appreciate your candor.”

“Thank you senator,” Cleghorne’s Hill responds, as she walks off stage. It’s her only line, and she isn’t seen again.

The committee then brings in Thomas, played by Tim Meadows, and they begin grilling him about how he went about asking Hill for a date. Then, rather than criticize him, they start to trade dating advice.

“Was she aware that, as your boss, you could have her fired? And she still didn’t go out with you?” an incredulous Nealon-as-Biden asks.

“There have been charges by Professor Hill that you talked causally with her about graphic scenes from a pornographic movie. Is that true?” Nealon’s Biden asks, adding, “And did that work? Did it break the ice?”

Later in the sketch, Phil Hartman’s Sen. Edward Kennedy (D-Mass.) offers dating advice, such as “Have you ever tried coming out of the bathroom nude and acting like you didn’t know someone was there? . . . That works, too.”

At first glance, the sketch is silly, skewering the senators for their boorishness.

“We try to be funny first and foremost. We don’t mind if the work also makes some important points, but we’re ostensibly trying to be funny,” former SNL writer Jim Downey, who contributed jokes to the sketch, told The Post in a phone interview. “It just seemed like a nice, funny take on the thing. Like a silly idea. We, generally speaking, prefer silly to, like, angry and preachy.”

Handey agreed, saying “to my mind, good political humor proceeds first from a funny idea, not from the editorial point you want to make. If the silliness makes a point, that’s fine, but secondary.”

Some, though, believe the sketch made the wrong point. Yarrow, author of “90s Bitch: Media, Culture, and the Failed Promise of Gender Equality,” told The Post, “The sketch is problematic, even more so watching it today.”

Its “interpretation of sexual harassment was that it was hysterical,” she added.

Yarrow said by focusing on the senators and Thomas, while literally removing Hill from the screen, the sketch ignored the victim and added insult to injury.

“The first problem is that the sketch centers the men, and not the woman. You could imagine so many ways that this sketch could have been done well and been fun, sort of centering Hill and hearing what she had to say, but she leaves the screen in seconds,” Yarrow said. And then, “they spend the whole sketch mocking sexual harassment, and conflating it with failed dating.”

Yarrow pointed to the Hartman’s Kennedy suggesting Thomas take a date on a boat, where it’s “hard for her to get away.”

“The takeaway of the sketch for me is that Clarence Thomas was bad at picking up women, which completely misses the point that he was being charged with sexual harassment, which is not only unlawful but perpetuates criminal activity,” Yarrow continued.

Handey readily admitted that he’s not sure if the sketch would fly these days, adding: “Political correctness hurts a lot of comedy efforts. Movies like ‘Blazing Saddles’ and ‘Animal House’ probably could not be made today.”

When informed of Yarrow’s perspective, he said: “A writer can only go with what pops into his head. If I had come up with a funny idea centering on Anita Hill, I certainly would have gone with that.”

“I don’t think the piece celebrates boorish behavior, but mocks it,” Handey added. “Characters acting boorishly — and oblivious to it — is one of my favorite things.”

Saturday’s premiere will probably include a piece on the hearings, Downey predicted, adding that if something bumps it then “this would be the wildest news week in American history.”

This time, Yarrow would like to see is a sketch that “centers the victim” and communicates her story and her feelings — and, in particular, the imbalance of power between the alleged aggressor and the victims.

“What [the Thomas sketch] centers as funny is the sex, and we know that sexual harassment isn’t about sex,” Yarrow said. “It’s about power.”