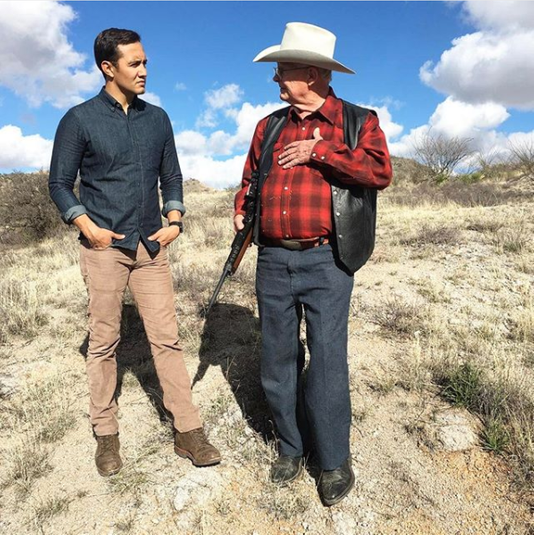 Every election cycle produces a new crop of road warriors as hundreds of reporters across the country pack their bags to cover local, state and national races.

In 2016, MSNBC introduced its Road Warriors, a group of young correspondents who hit the campaign trail to report across MSNBC, NBC News and NBC News Digital.

As the midterm congressional elections draw near, MSNBC has brought back its panel of Warriors.

USA TODAY spoke with three MSNBC Road Warriors to learn some of their hard-earned travel knowledge from life on the road. Here are their tips for parachuting into major cities, farm country, border towns, wealthy suburbs and more.

Covering the elections requires taking off at a moment’s notice to any part of the country.

Soboroff likes to show up with few planned meetings.

For a segment of the “What Matters?” series, he and his team showed up at the border in Eagle Pass, Texas, and met people while driving and walking around. He met people on a home porch, outside a beauty college and on a golf course along the Rio Grande.

“Generally, one thing leads to the next,” he says. “You just have to talk to people.”

Being on the road so much can take its toll on one’s physical and emotional well-being. For TV personalities, they have the added pressure of looking camera-ready all the time.

His tips for looking good on camera? “Drink coffee. Shower. Drink more coffee. Shave occasionally. In that order,” he says.

He tries to stay fit by doing push-ups and a short Pilates routine in his room every day. His colleagues have running and stretching routines. “We could probably just start a workout class,” he says.

Soboroff has a few other secrets for traveling well. He only carries on his luggage. And he always carries a puffy jacket for planes. “They make great pillows,” he says.

Covering this election cycle has been a unique experience, he says.

“This election, we’re focused on putting people on TV who don’t live in Washington, New York or L.A.,” he says. “It’s way more interesting – and informative.”

Schwartz turns to Snapchat to prepare for a trip. He posts where he is headed to and what he is going to cover.

He usually ends up getting messages from viewers of his “Stay Tuned” show in the area. The majority of his viewers are millennials, those in their 20s and early 30s.

“I’m always blown away at how engaged and earnest they are with opinions on anything from immigration, gun control or latest political memes making the rounds in their community,” he says. “Snapchat also has an incredible map feature that helps us keep tabs on political rallies and trending events close by.”

Staying camera-ready has proved quite challenging. Even scheduling a haircut takes work, he says. Sometimes he will go a month and a half without getting a trim.

“My hair grows much faster on one side, which occasionally leads to some questionable ‘Edward Scissorhands’ decision-making,” he says.

Another challenge: packing enough shirts and keeping them ironed. His favorite road shirt is a reversible grey Ben Sherman button-up on one side and black and white flannel on the other. He also has a space-saving jacket with lapels and a collar that pop out for a bundled look and fold down to turn into a sports coat.

His travel secret is to have a pocket for everything.

“I am a notorious misplacer of things, so I’ve literally hand-sewn pockets and little bags into my luggage,” he says. “I’ve made pockets for headphones, cash, my glasses, a lavalier microphone, keys and charging packs.”

He also keeps three time zones on the face of his Apple Watch so he can calculate deadlines in New York, Los Angeles and any other city he is in.

To stay healthy on the road, he tries to eat as many Açaí bowls as possible and drinks juices if he starts feeling sick.

“I’m usually not motivated enough to put myself though workouts, so YouTube is a huge help,” he says.

To sleep, he plays “The Office” on his iPad for background noise.

“I usually crank my air conditioning and then surround myself with a fort made of all the pillows in the room,” he says. “I also avoid Twitter before bed at all costs because it gives me crazy anxiety.”

Morgan Radford is always on the go for NBC. (Photo: MSNBC)

Radford will talk to anyone.

“While waiting at the airport gate, on the car rental shuttle, in the taxi cab, or checking into a hotel,” she says. “For me, the idea is always to get as much broad, initial context from a place as I can – which provides important color to the details I hear later when asking more pointed questions while reporting.”

Radford has figured out a few ways to navigate traveling around the country.

“I always keep a colorful scarf in my bag to add some liveliness at the end of a long travel day – and to give an otherwise ordinary travel outfit a more polished finish,” she says. “In terms of makeup – a dollop of concealer and light lip gloss can usually do the trick.”

While on the road, sleep is most important to her. She often is on air from 7 a.m. to 7 p.m. In September, she was in four time zones, two countries and 11 cities.

She keeps a sleeping mask in her purse so she can sleep any time she has a change.

Before she goes on a long trip, she lists her health priorities.

Some weeks, she may choose to exercise more instead of being a stickler for healthy eating. Other weeks, she will follow a stricter diet and exercise less.

Because her schedule is so up in the air, she makes sure to have access to vegetables and avoids sugary snacks in order to keep her energy level up.

She travels with a roller suitcase with four wheels and two handles and a stackable backpack that can double as a briefcase.

She also carries a thin, flat, foldable purse that her mother gave her that slips over the handle of her suitcase.

“It’s my most valued travel item,” she says. “It helps me access my phones and passports more easily, and I can slip it off quickly on the plane so I don’t hold up other passengers while trying to find the things I need while boarding. And when I get to a city – I can use it as a small standalone purse.”