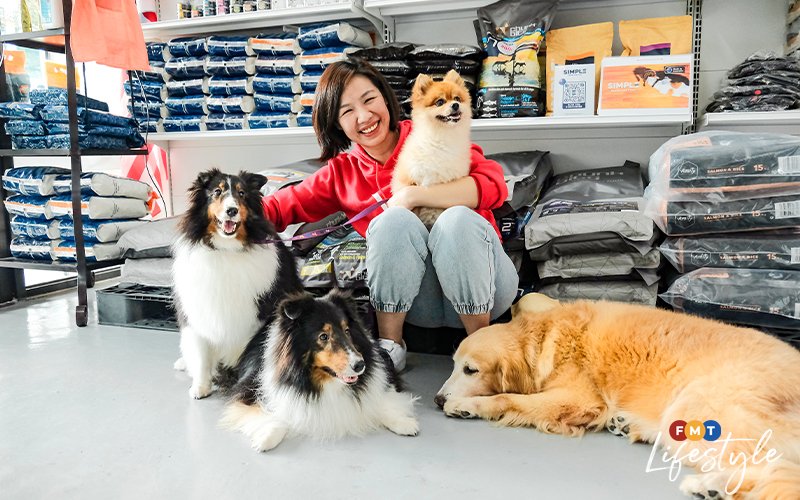 But this 40-year-old can do more than just recommend the right food for your furry friend – she can communicate with them.

“I had a friend who was having trouble with her dog, which she rescued as a puppy. The dog had a rather quirky character in that she suffered from anxiety and would snap out of the blue,” said Lim.

By communicating with the dog, Lim discovered that the dog’s mother was a stray and had to give birth in the bushes around a housing area.

“Life as a stray was not easy and while the mum was giving birth, she was fearful and anxious that someone might come and hurt her puppies.

“So, all that negative energy was passed onto the litter. I asked my friend if all her puppies have similar anxiety issues and she instantly said yes.”

Though this may sound like a scene from the movie ‘Dr Dolittle’, this was just a regular day in the animal communicator’s life.

If you think that Lim possesses some sort of innate superpower, you would be mistaken.

Lim got straight to the point when asked about this ability: “There are classes on animal communication,” she answered.

As someone who ran a pet boarding house before Bark N’ Purr, Lim dealt with a lot of dogs that came with their own set of problematic characteristics. On top of that, she was also quite active in rescuing and fostering animals.

Lim told FMT that these experiences formed the foundation of her curiosity about what animals are going through.

Call it fate or destiny, but one day, a very close friend of hers informed her that she knew someone who had completed their animal communication studies and that the teacher was travelling to Malaysia to host classes.

“At that point in time, I had this concept in mind that animal communication was more about body language.

“But when I joined the class, I was thinking ‘oh dear what did I get myself into?’,” chuckled Lim, as she looked back on her first day in the animal communication class.

So, who actually approaches Lim for her seemingly mystical services?

She explained that there are quite a few categories in which the pet owner would fall under; the first being those who are simply curious about animal communication and are eager to know if their pets are happy.

People who fall under the second category are those whose pets have reached maturity and start developing signs of illnesses; or in their senior years and might be crossing the rainbow bridge soon.

That being said, Lim’s exceptional communication skills are not limited to just Fido or Whiskers.

“I basically work with anything that moves,” she laughed.

Though she works with dogs and cats often, her furry clients extend all the way to sugar gliders, hamsters, fish, parrots, ducks and horses. Even chickens and snakes are not forgotten or dismissed.

This form of “work” or “gift” may seem like a bunch of hooey to sceptics, and one might imagine that it would be hard to explain or even justify.

But Lim just usually laughs this off and explained to FMT that it’s like attending an examination, because many pet owners try to put her on the spot with random questions such as the pet’s favourite toy and the colour of the toy.

“It’s always funny to see their shocked faces when you give them an accurate answer,” she said.

For normal humans (who have never attended animal communication lessons), a cat purring or a dog wagging its tail might be the only telltale signs of their emotions.

But what exactly can an animal communicator tell? And what are the other signs that most inexperienced eyes have missed?

“When I first began practising, I usually saw images when I connected to a dog. I don’t hear words but they explain to me in images, and it comes out often like a comic strip.

“But as I gained more experience, it came in like a conversation. I can even start feeling their joy, sadness and even pain – be it a tooth or gum issue. I can even taste what they taste!”

She chortled over the recollection of a recent experience with a client, where the owner had complained that the dog had an appetite for sand.

When Lim communicated with the dog, she could actually taste whatever it was tasting.

Feeling slightly sceptical but still interested to know what your dog, cat, snake or any other pet thinks of you?

Lim requires the owner to send in their pet’s most recent photograph, age, gender and breed.

Once she receives this information, things get interesting.

“I will ask your pet for permission on whether he or she will allow me to communicate with them. You might be surprised to know that sometimes, the request does get rejected.

“Usually, us pet communicators will try to ask three times. If we still get rejected, we would recommend another animal communicator. But that’s very rare!”

However, with the resurgence of Covid-19 cases and lockdowns, Lim worries about the effects on pets – especially since some owners have said that their pets have been behaving weirdly.

She explained that the heavy and tense energy shared by the entire household is picked up by pets, as they are very sensitive to sudden changes.

“With the lockdown, pets would be wondering why their owners are at home all the time only to disappear back to work months later.”

And now that we’re back at home again, Lim said that pets don’t have a chance to get used to the situation.

“Many owners don’t make a habit of talking to their pets, thinking that they do not understand them.

“But it’s not the words, you see, it’s the energy and emotions.”

Want to find out what’s on your pet’s mind, or whether they’re holding onto past trauma or if they’re dreaming of eating sand? Reach out to Elizabeth Lim at her Bark N’ Purr Facebook page here or WhatsApp her at 016 311 4606.