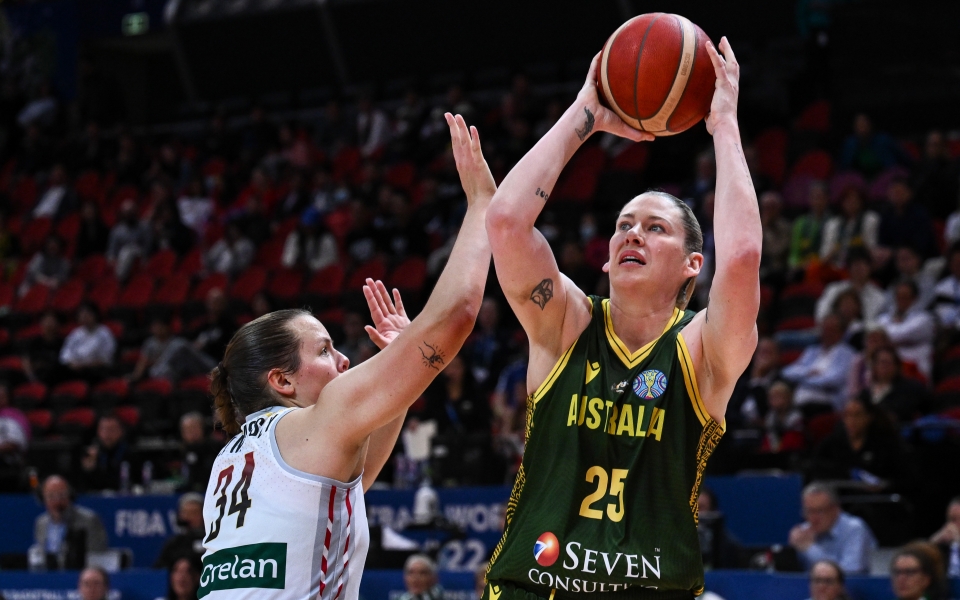 Lauren Jackson has produced the best performance of her Opals comeback so far in an 86-69 quarter-final defeat of Belgium that confirmed Australia will face China in the basketball World Cup’s final four.

Now only two wins away from a potential second World Cup gold medal, the Opals shot with superior accuracy at Sydney’s Qudos Bank Arena on Thursday night, and outworked their opponents at both ends of the court.

Jackson only made a cameo in the Opals’ last match but played more minutes against Belgium than in any other game at her comeback World Cup, and finished with more points (12).

She came on in the first quarter and drained a three-pointer to give Australia what was then a game-high lead of 11 points.

The Opals take care of business and will face China tomorrow 🔝 #FIBAWWC pic.twitter.com/rkmf3sVLGp

The 41-year-old has scored at least one three-pointer in each of Australia’s six games – no small feat given her limited minutes – and had plenty of success driving through the paint against Belgium.

A member of the All-Star Five at the 2018 World Cup, Emma Meesseman scored 32 points for Belgium the last time they met the Opals and was a big loss with a calf injury.

But the Europeans found other routes to score and remained in the fight before half-time, with centre Kyara Linskens proving one of few players able to match the Australian talls for muscle this World Cup.

The Opals rode their shooting precision to a 15-point half-time lead and were particularly sharp from deep, as they have been all tournament.

Tall options Cayla George and Marianna Tolo stood up on the Opals’ way to a 9-0 run to start the second half as the Australians continued to outwork their opponents on rebounds.

Belgium came out of three-quarter time firing and had the home crowd shifting in their seats, but George settled the nerves with seven points in the term to put the result beyond doubt.

Opals forward Bec Allen returned from the rib injury that forced her to leave Sunday’s game in a wheelchair but played only two-and-a-half minutes as Australia’s lead was never under serious threat beyond half-time.

The win sets up a semi-final date on Friday with China, which advanced to its first semi-final in 28 years by defeating France 85-71 earlier on Thursday.

Re-live the action as China and France treated us to a #FIBAWWC classic! 🌟 pic.twitter.com/Dz1FHbyxtJ

Australia will hope to avenge the last-gasp loss it suffered against the same opponents at the Tokyo Olympics.

Earlier, Natalie Achonwa starred as Canada defeated Puerto Rico 79-60 to storm into its second World Cup semi-final and first since 1986.

There it will meet three-time defending champions the USA, which may be without wing Kahleah Copper after she suffered a hip injury during her side’s 88-55 quarter-final win over Serbia.

Team #MadLove takes care of business to book a date with Team USA in the World Cup Semi-Finals!#FIBAWWC pic.twitter.com/sCVRua0c1I