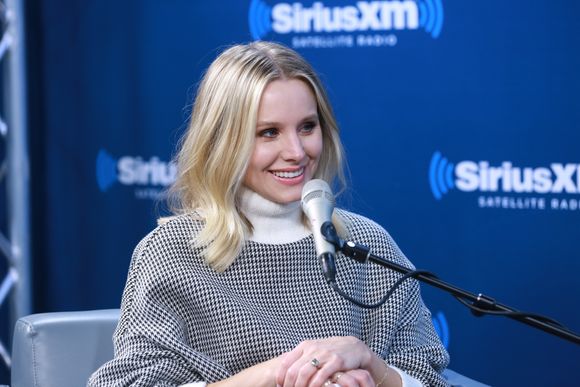 Kristen Bells talked about how her daughter found out her parents are famous and what fans can expect in “Frozen 2” on an appearance on SiriusXM’s EW Radio. (Photo: Maro Hagopian)

Kristen Bell’s daughter was shaken to her core when she found out her parents are famous, “The Good Place” actress revealed today during a conversation on “EW Spotlight” on SiriusXM’s Entertainment Weekly Radio.

Host Jessica Shaw starts out asking Bell if her kids have seen “The Sloth Video,” the viral video of Bell crying hysterically with happiness when husband, Dax Shepard, brought a sloth to their house for her 31st birthday. Bell shared the video on “Ellen” in 2012. It’s been viewed more than 27 million times and is gifted the world with one of the all-time best gifs:

No, her kids haven’t seen the video she said. Daughter Lincoln only recently found out her parents are famous.

The realization started with a conversation between dad and daughter about Dax’s podcast, Armchair Expert, which he co-hosts with Monica Padman. Lincoln wanted to know if people listen because of him or Monica. Dax responded he thought people liked both host but might initially tune in for him, “because more people know me because I’m famous.”

He responded, well yeah and asked why she thought people asked to take pictures with him and mom?

“It was this moment that we recognized ‘famous’ meant something to her at school, like it was something people collectively worshiped,” said Bell.

But, she continued, her daughter didn’t understand that people are famous for who they are, but “just for their work.” And she’s happy to keep it that way.

That’s also part of the reason Bell doesn’t take photos with fans when she’s out with her kids. She doesn’t want them to think, “Hm, my mommy always ignores me to talk to strangers.”

Slated for a November 2019 release, “Frozen 2” is “not just episode two…it’s something you need to see (the characters) go through because it affects the audience,” she said.

Fans will meet new characters in a story that is deeply personal to her, she said. Writer Jennifer Lee asked Bell to collaborate as she was writing the script, asking the actress to share what she goes through that’s similar to the character of Anna and what she though Anna’s next move would be.

“There are a lot of very, very intimate moments for me in this movie that feel like they are from my real life…it’s going to make me cry,” Bell said.

Thanks, Kristen. We didn’t think we could be any more excited and now you give us that tidbit.