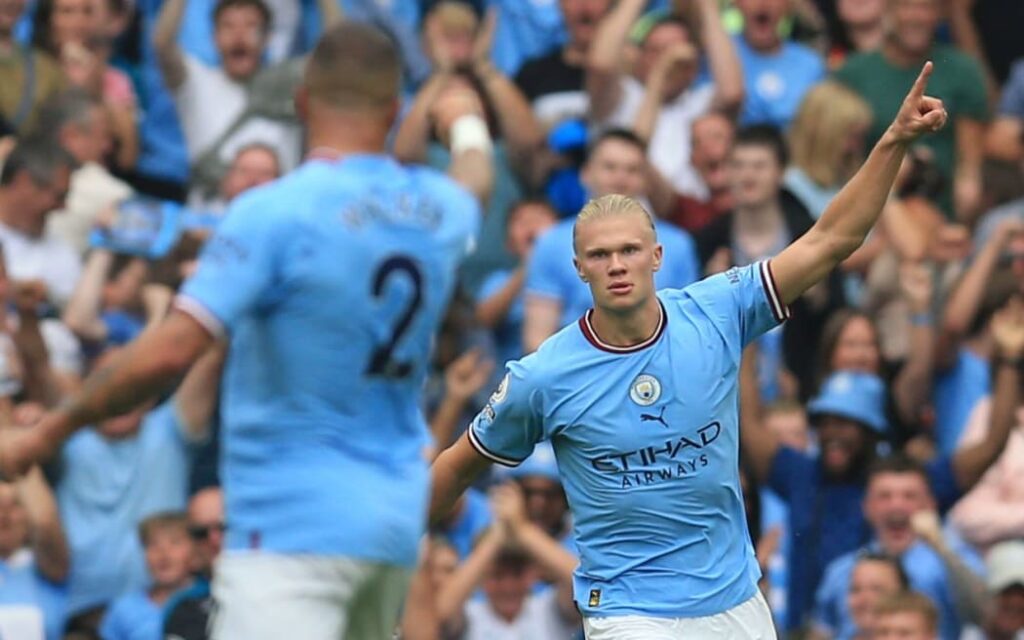 Haaland has scored nine goals in five league games since joining City from Borussia Dortmund and has back-to-back hat-tricks after netting three in the weekend’s win over Crystal Palace.

Pep Guardiola’s side made it four wins out of five games with 19 goals scored.

They’re two points behind leaders Arsenal, who kept their 100% record with a 2-1 win over Aston Villa.

It was Villa’s fourth defeat in five games and adds to the mounting pressure on manager Steven Gerrard.

Tottenham are another two points behind City in third following a 1-1 draw with West Ham.

West Ham, who got their first win of the season at the weekend, are in 14th place with four points.

The Reds improve to fifth on the table on eight points, while Newcastle stay 11th.

At the bottom of the table Bournemouth and Wolves drew 0-0.

Argentina coach Michael Cheika has made several changes to his starting lineup for this weekend’s test against the All Blacks despite the Pumas historic win last weekend in Christchurch.

The 25-18 victory in Christchurch was Argentina’s first over the All Blacks on New Zealand soil.

The Wellington Phoenix have been beaten 2-0 by Macarthur FC in the quarter-finals of the Australia Cup.

Winger Al Hasan Toure opened the scoring late in the first half but it wasn’t until the 88th minute that substitute Lachlan Rose secured Macarthur’s place in the semi-finals when he pounced on a mistake to score their second.

Wellington had their chances in an end-to-end match, but ultimately weren’t as clinical as their opponents.

Phoenix head coach Ufuk Talay named an unchanged XI for the quarter-final, with Callan Elliot keeping his place at right back despite Tim Payne’s return to fitness.

Payne was named amongst the substitutes, alongside new Brazilian attacking midfielder Yan Sasse.

The Wellington Phoenix will now turn their attentions to the upcoming A-League season. The squad will remain in Sydney this weekend to play a pre-season match against the Newcastle Jets on Sunday.

Convicted murderer Oscar Pistorius is going to court to try to force South African authorities to hold a parole hearing for him.

The former Paralympic gold medallist is serving a 13-year sentence for killing his girlfriend in 2013.

Pistorius shot dead Reeva Steenkamp through a locked toilet door, claiming he mistook her for a burglar.

He is seeking an early release over a dispute about when his sentence started.

A series of challenges and rulings by the Supreme Court of Appeal has led to confusion about when his sentence became effective.

Pistorius argues that he has already served enough time in prison to be eligible for parole, and therefore authorities should look at whether he can be released early.

Parker now fighting for a title

This month’s fight between New Zealand heavyweight Joseph Parker and Briton Joe Joyce will now be for a title.

The WBO Championship Committee has ruled that the September 24 clash in Manchester will now be for the WBO interim heavyweight championship.

The decision was made in response to a request from Queensberry Promotions on behalf of current WBO number one contender Joyce.

The WBO Committee notes that the organization’s heavyweight championship has only been at stake on two occasions (Oleksandr Usyk/Anthony Joshua bouts) over the last two years.

With Usyk headed toward a probable fight with Tyson Fury in 2023, the activity in the division has been significantly low.

Therefore, an interim title is in the best interests in the division for the fighters, the fans, and the WBO.

Groves secured the victory in a tight finish, beating Danny van Poppel (Bora-Hansgrohe) and Tim Merlier (Alpecin-Deceuninck) to the line.

The Australian’s victory came as a relief to the team after their leader Simon Yates was forced to pull out of the race following a positive COVID-19 result ahead of Wednesday’s stage.

Race leader Remco Evenepoel (QuickStep-AlphaVinyl) kept his red jersey after finishing safely in the peloton, while Mads Pedersen of Trek-Segafredo stayed on top of the points classification.

Earlier, Alaphilippe was forced to abandon the stage with 64km remaining when he slid out on a right-hand bend while riding towards the head of the peloton with Evenepoel and the rest of the QuickStep-AlphaVinyl team.

The French rider left the stage in an ambulance with a suspected broken collarbone and the crash casts doubt over the defence of his title at next month’s World Championships in Wollongong.

No verdict in Giggs trial

The jury in the trial of former Manchester United winger Ryan Giggs was discharged after failing to reach verdicts on charges he committed assault on and used controlling behaviour towards his then girlfriend.

Giggs, 48, faced charges of causing actual bodily harm to Kate Greville along with controlling and coercive behaviour. He also faced a charge of common assault of Greville’s sister Emma.

The jury of seven women and four men told the judge they had been unable to reach verdicts after a trial which lasted over three weeks.

The Crown Prosecution Service now has seven days to decide whether to proceed with a retrial.

Judge Hilary Manley told Giggs that any retrial might not be held until June of next year. Giggs has been bailed until the CPS decision is made.

Giggs, the former Wales manager, had pleaded not guilty to the charges and his defence said the allegations were “based on distortion, exaggeration and lies”.

The former United player was first arrested in the case and released on bail in November, 2020.

Chelsea have completed the transfer of defender Wesley Fofana from Leicester City, with the Frenchman signing a seven-year contract with the west London club.

Financial details were not disclosed but British media reports said the deal was worth $133 million.

During his two seasons at Leicester, he made 52 appearances in all competitions, including 37 in the league and 11 across two European campaigns.

Meanwhile Manchester United manager Erik ten Hag said the club will not sign more players before this week’s transfer deadline following the completion of the discussions to sign Antony and Martin Dubravka, while he expects Cristiano Ronaldo to stay.

Ten Hag reiterated his belief that Ronaldo will stay at the club, amid intense speculation over the 37-year-old’s future after British media reported the Portugal forward wanted to leave United to play Champions League football.

United, 11th in the Premier League standings, face Leicester City away tomorrow and remain without injured striker Anthony Martial, while defender Victor Lindelof will be assessed after he returned to training.

Pogba was extorted by childhood friends

France midfielder Paul Pogba was the target of extortion by childhood friends since March and paid 100,000 euros to that group in the spring, a source close to the investigation told Reuters.

Pogba released a statement on Sunday saying he is the victim of extortion attempts and threats from an organised gang and that authorities in Italy and France are investigating the matter.

“We can confirm most details (that emerged in the French media and in Pogba’s statement)”, a source close to the investigation said.

The French prosecutor told Reuters that the investigations have been entrusted to the OCLCO, a unit within the judicial police tasked with investigating organised crime.

Pogba, 29, suffered a knee injury in a training session with Juventus last month. He opted not to have surgery and to undergo “conservative therapy” in order to be fit to play in the Qatar World Cup starting on Nov. 20.