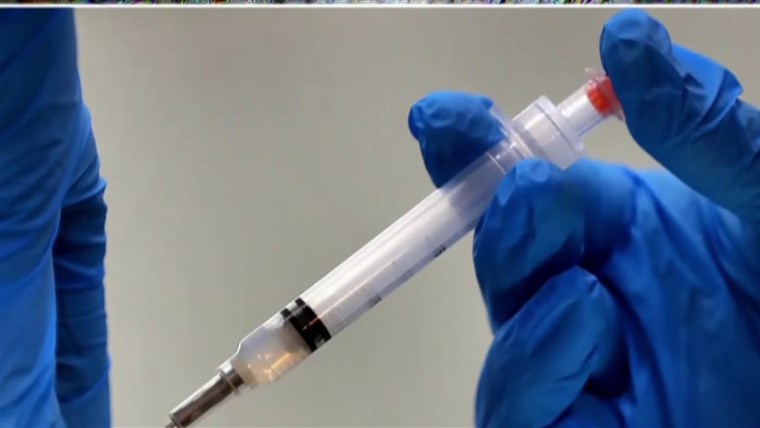 Police use tear gas, water cannon amid rioting over Covid restrictions in Netherlands

THE HAGUE, Netherlands — Groups of youths confronted police in Dutch towns and cities Monday night, defying the country’s coronavirus curfew and throwing fireworks. Police in the port city of Rotterdam used a water cannon and tear gas in an attempt to disperse a crowd of rioters.

Police and local media reported trouble in the capital, Amsterdam, where at least eight people were arrested, the central city of Amersfoort, where a car was turned on its side, and other towns before and after the 9 p.m. to 4:30 a.m. curfew began.

It was the second night of unrest in towns and cities across the Netherlands that initially grew out of calls to protest against the country’s tough lockdown, but degenerated into vandalism by crowds whipped up by messages swirling on social media. The New York City MTA launched a visual memorial to honor the 136 transit employees who have died from Covid-19, the agency announced in a news release Monday.

Today we’re unveiling a tribute to our incredible workforce called “Travels Far” in remembrance of those who were taken away from the people who love them far too soon.

This memorial reflects the wonderful tapestry of individuals that make up our extraordinary transit family.

The memorial, built around photographs shared by the employees’ family members and designed by MTA Arts & Design, is entitled “TRAVELS FAR” and is named after an original poem commissioned specifically for the project by former U.S. Poet Laureate Tracy K. Smith.

The 8-minute video tribute can be seen at 107 stations throughout the city starting Jan. 25 through Feb. 7 and can also be seen online.

“COVID-19 has been a devastating scourge on our entire country and, tragically, that includes the MTA’s workforce,” said MTA Chairman and CEO Patrick J. Foye. “”We quickly made sure that those families who lost an MTA worker to COVID were taken care of financially, but the launch of today’s memorial is aimed at personalizing the legacies of those who died during the pandemic.”

Minnesota public health officials announced what appears to be the first known case of the coronavirus’ Brazil P.1 variant in the nation.

The patient with variant is a resident of Minneapolis/St. Paul who became ill after traveling to Brazil, the Minnesota Department of Health said.

The strain was found among the 50 random samples analyzed every week as part of the state’s variant surveillance program, according to the health department. The Brazil variant is a distinct variation from those seen in Britain and South Africa and thought to be more transmissible than the coronavirus strain that was prevalent at the beginning of the pandemic.

“The good news is that we can slow the spread of this variant and all COVID-19 variants by using the tried-and-true prevention methods of wearing masks, keeping social distance, staying home when sick, and getting tested when appropriate,” Minnesota Commissioner of Health Jan Malcolm said Monday.

Police use tear gas, water cannon amid rioting over Covid restrictions in Netherlands

THE HAGUE, Netherlands — Groups of youths confronted police in Dutch towns and cities Monday night, defying the country’s coronavirus curfew and throwing fireworks. Police in the port city of Rotterdam used a water cannon and tear gas in an attempt to disperse a crowd of rioters.

Police and local media reported trouble in the capital, Amsterdam, where at least eight people were arrested, the central city of Amersfoort, where a car was turned on its side, and other towns before and after the 9 p.m. to 4:30 a.m. curfew began.

It was the second night of unrest in towns and cities across the Netherlands that initially grew out of calls to protest against the country’s tough lockdown, but degenerated into vandalism by crowds whipped up by messages swirling on social media.

WASHINGTON — President Joe Biden said he expects anyone who wants a vaccine to be able to get one by the spring and he upped his vaccination goal for his first 100 days in office.

Biden said Monday he now thinks the country can administer 1.5 million shots a day in the coming weeks and give 150 million vaccinations over the next 100 days, “with the grace of god.”

In December, Biden set a goal of 100 million vaccines in his first 100 days and at the time, no vaccine had been cleared for use. But with states ramping up their vaccination efforts in recent weeks, the country is already averaging Biden’s goal of around 1 million shots a day.

In order to reach his new goal, Biden said the federal government is going to have to set up more vaccination sites, hire more people to administer the vaccines, and ensure there are enough supplies of things like syringes. He is asking Congress for more than $400 billion to fund those efforts.

“It is going to be a logistical challenge that exceeds anything we’ve ever tried in this country, but I think we can do that,” Biden said. He said that by summer “we’re gonna be well on our way to heading toward herd immunity” including making the vaccine available for children.

California is ramping up its lagging vaccination effort, governor says

California Gov. Gavin Newsom said Monday that the nation’s most populous state was ramping up its lagging vaccination effort, tripling the number of doses given daily between the beginning of the month and Jan. 15.

On Jan. 4, 43,000 doses were administered across the state, he said. Eleven days later, that number was 131,000. The state’s goal is to continue to substantially increase that number, he said.

Experts have attributed the slow rollout to everything from the state’s size to limited federal funding, and California’s efficient health care system, with its lack of extra medical workers trained to administer the vaccinations.

Newsom said Monday that California is “like a large ship. It takes a little to shift course.”

He also announced the launch of a centralized vaccination scheduling system that can be accessed through a smartphone app. The platform is being tested in two of the state’s largest counties — San Diego and Los Angeles — and will be rolled out across the rest of California by early February, he said.

Google to put vaccination sites on its search and map apps

Google said Monday that its search and map apps would soon display information about where to get Covid-19 vaccinations, beginning in four states.

“In the coming weeks, Covid-19 vaccination locations will be available in Google Search and Maps, starting with Arizona, Louisiana, Mississippi and Texas, with more states and countries to come,” Google CEO Sundar Pichai said in a blog post.

Information about vaccinations has been hard to come by in some places, and Pichai said searches for “vaccines near me” had increased fivefold since the beginning of the year. He said Google would rely on authoritative sources, such as government agencies and retail pharmacies, to gather the information. The briefings, featuring public health officials and members of the administration’s Covid-19 response team, will begin on Wednesday and continue regularly “for the foreseeable future,” Psaki told reporters.

She said the briefings will focus on bringing the public “key updates” on the virus and the federal government’s response to the pandemic.

Vaccine tourism on the rise as wealthy international tourists eye an opportunity in the U.S.

Shortly before the Covid-19 vaccine made its debut last month in the United States, an Indian travel agency called Gem Tours & Travels announced it was registering customers for an exciting new package: four-day trip from Mumbai to New York City with a coronavirus shot thrown in for about $2,000.

“We are only taking registrations of Indians with a valid 10-year U.S. visa,” Shah told ThePrint. “We are not taking any money but just collecting data for the moment. We are proud to have coined the term ‘vaccine tourism’.”

Soon, competitors like the Kolkata-based Zenith Holidays were registering customers for vaccination packages.

Pronab Sarkar, president of the Indian Association of Tour Operators, condemned the companies for peddling these junkets. But Zenith Holidays, which generally does not offer travel packages to the U.S., still has on its website a “Vaccine Tourism” tab where customers can fill out a registration form, click send, and within minutes an email from the company pops up in their inbox promising more information soon.

“Thank you for showing interest in our Holiday,” the email states.

Just how many Indians signed up for such a vaccination junket to the U.S. was not immediately clear because neither Shah nor anyone from Zenith Holidays responded to several emails from NBC News or an inquiry posed via the registration form.

But the very idea that somebody with money but no immediate access to the scarce Covid-19 vaccine could fly to another country to get a shot was raising both outrage and ethical questions.

The Metropolitan Police broke up an illegal rave attended by 300 people on Saturday in defiance of Covid-19 regulations, the agency said in a news release.

Officers were deployed to the east London neighborhood of Hackney around 1:30 a.m. after receiving reports of an unlicensed music event. They made multiple attempts to engage with the organizers who were uncooperative and at one point padlocked the doors to prevent police from entering the space.

After forcing their way inside, officers discovered 300 people packed in the small space. Seventy-eight attendees were issued £200 fines.

300 people decided to put themselves, their families and the wider community at risk last night by packing into a railway arch in Hackney for an illegal rave. Officers issued more than £15,000 in fines for the blatant Covid breaches. More here > https://t.co/J4p4PlDwWB pic.twitter.com/l8Hz3XTKAh

“This was a serious and blatant breach of the public health regulations and the law in relation to unlicensed music events,” said Chief Superintendent Roy Smith, who responded to the incident. “Whilst we will always seek to engage and explain, the message to those who have a total disregard for the safety of others and breach the law so blatantly is clear, our officers will act swiftly and decisively”

London has been hit especially hard by the Covid-19 pandemic. The city has reported more than 628,000 cases and more than 12,000 deaths from the virus, according to data from Public Health England.