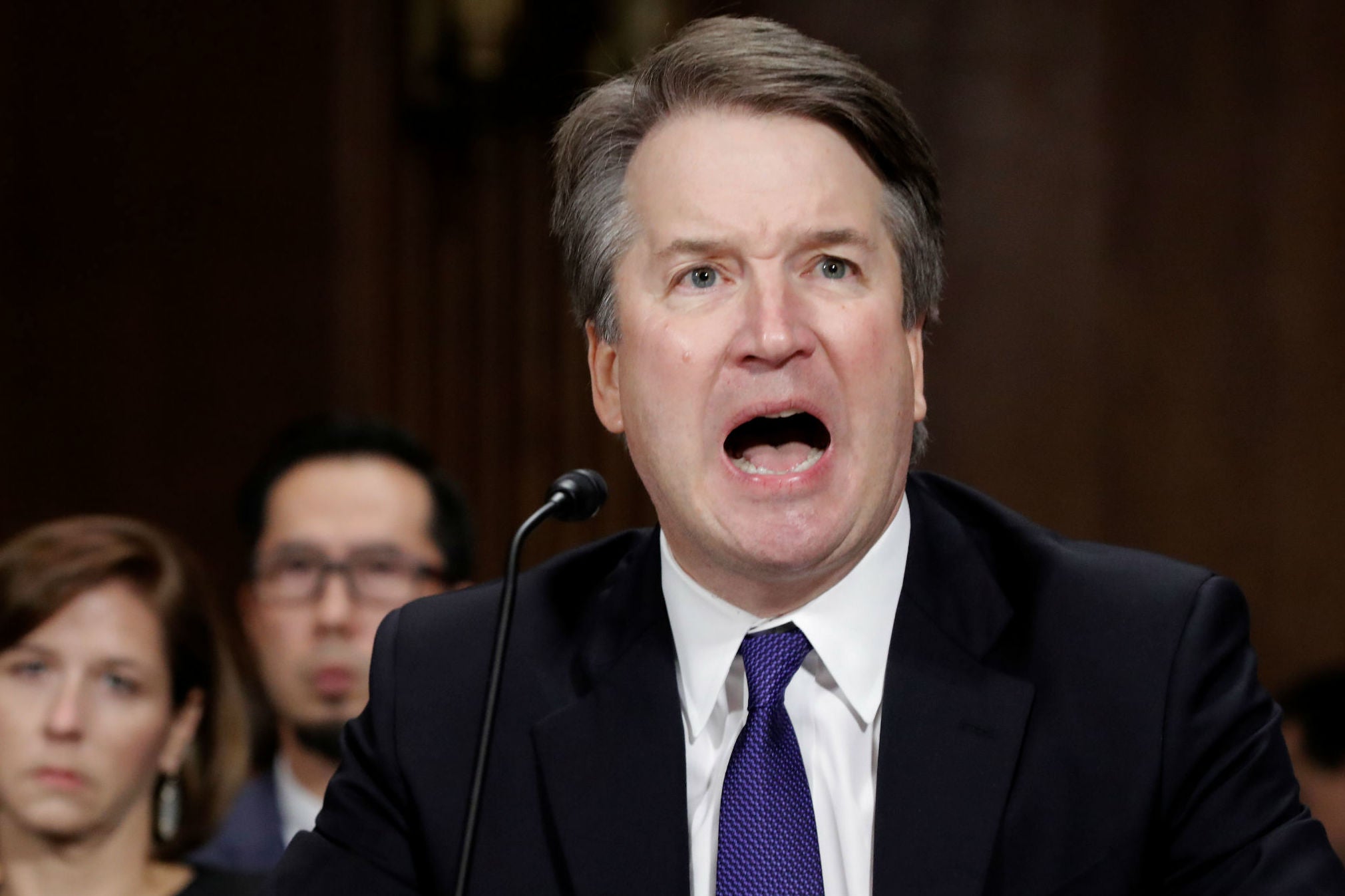 Christine Ford has told Congress that she believed Brett Kavanaugh was “going to rape her” in dramatic testimony over her sexual assault allegation against Donald Trump’s Supreme Court nominee.

Dr Ford said she was “100 per cent” sure it was Mr Kavanaugh who assaulted her.

Later, Mr Kavanaugh appeared in front of the same Senate panel, the judiciary committee, and denied the allegations calling the hearing a “circus”. He said he believed Dr Ford had been assaulted at some point, but not by him.

Dr Ford said she was “terrified” of testifying, but that she believes it is her “civic duty”. Before she began Senator Dianne Feinstein, the ranking Democrat on the Senate Judiciary Committee, commended her on coming forward.

Donald Trump has said “it’s possible” he’ll change his mind about nominating Brett Kavanaugh for the Supreme Court after hearing the testimony of Christine Blasey Ford, who alleges the judge tried to force himself upon her at a party while both were high school students in the 1980s.

But president has done little else to suggest Mr Kavanaugh’s alleged victims would get a fair hearing, defending his nominee a number of times and branding the allegations a Democrat-driven “con job”.

Our international editor Chris Stevenson has the full story:

Michael Avenatti, who is representing the third woman to come forward with allegations of sexual misconduct against Brett Kavanaugh, has fired back at Donald Trump after he called him “a third rate lawyer who is good at making false accusations”.

He took at dig at the president’s former lawyer, Michael Cohen, who last month pleaded guilty to paying hush money during the presidential election.

Mr Kavanaugh and his friend Mark Judge have denied the allegation.

The Senate Judiciary Committee hearing is due to get underway at 10am local time (3pm BST).

The hearing will take place in a small committee room with only a few journalists admitted, with a limited number of cameras.

That’s a change — at Christine Blasey Ford’s request — from the first four days of hearings into Brett Kavanaugh’s nomination for the Supreme Court.

You’ll be able to watch the Senate Judiciary Committee live on The Independent from 10am local time (3pm BST):

In seeking to defend Mr Kavanaugh at his press conference last night Mr Trump claimed that “women had been paid to make things up” about the president.

The hearing will begin with Christine Blasey Ford, 51, giving her account of an alleged sexual assault in 1982.

According to Ms Ford, Mr Kavanaugh assaulted her at a party when she was 15 and he was 17. She has claimed he pinned her to a bed, groped her and tried to pull off her clothes, covering her mouth with his hand when she tried to scream.

Members of the Senate Judiciary Committee will then question Ms Ford. The committee’s all-male Republican majority has hired a female lawyer with experience prosecuting sex crimes to take charge of their questioning.

Democratic senators will ask their own questions.

Mr Kavanaugh, who denies the allegations made by Ms Ford and two other women, will testify later, although he will not be in the room when Ms Ford is speaking.

Here is the view Dr Ford will see this morning from her seat in front of the committee.

You can read here about Mr Trump’s last nominee, Justice Neil Gorsuch, whose Senate hearing was almost milquetoast in comparison.
Some of our readers have been saying Dr Ford’s testimony reminds them, chillingly so, of Anita Hill.
In 1991 Ms Hill, a lawyer, accused Supreme Court Justice Clarence Thomas of sexual harassment just ahead of his confirmation.

Mr Thomas, who was nominated by President George HW Bush, was almost certainly going to sail through his hearings with his public character intact until an FBI interview with Ms Hill was leaked to the media.

Ms Hill accused Mr Thomas of sexually harassing her while he was her boss at two different federal government agencies –  the US Department of Education and, ironically, the Equal Employment Opportunity Commission.

Mr Thomas had then moved on to a judgeship just a year before his nomination.

When asked why she continued to work under Mr Thomas at the second job despite the harassment, Ms Hill explained working in a position to promote civil rights had meant more to her.

Her testimony brought to light what many thought were uncomfortable, intimate details of the harassment, but it served as a powerful moment in gender equality for many women:

Washington insiders have indicated the Senate Judiciary Committee was worried about the “optics” of so many Republican men interrogating Dr Ford about the sexual assault she claims.

Instead, sex crimes prosecutor Rachel Mitchell has been appointed to ask questions on the Senators’ behalf.

Read more about her here:

Mr Grassley begins the hearing, saying Ms Ford and Mr Kavanaugh have both had a tough time the past few weeks.

He said he hopes for a “safe, comfortable, and dignified” hearing for both witnesses and noted he wants a “show of civility” from his colleagues.

What that means for Mr Kavanaugh and Ms Ford separately may be determined by political affiliations, but Mr Grassley seems to hope that is not the case.

The politics have now come in as Mr Grassley blames the “ranking member” on the committee, Democrat Dianne Feinstein for her actions and how Democrats “refuse to participate in what should have been a bipartisan investigation”.

He said Ms Ford was mistreated with the leaking of her identity, after she had sent a confidential letter about the allegation to Ms Feinstein and the California delegation.

Ms Ford is a professor at Palo Alto University in the state.

“I look forward to a fair and respectful hearing, that’s what we promised Dr Ford,” Mr Grassley said.

“it is not an easy [subject] to discuss,” he said, explaining the reason for appointing Ms Mitchell to ask questions.

“Grandstanding and chaos” is how Mr Grassley described how Democrats conducted the first few days of Mr Kavanaugh’s heading.

Ahead of Ms Ford’s testimony, read more here about Anita Hill from our own Andrew Buncombe, who is also bringing us updates from DC.

“1 in 3 women and 1 in 6 men” will experience some sort of sexual assault, and “according to the Rape and Incest National Network (Rainn) nearly 60% of assaults go unreported,” Ms Feinstein said.

“While young women are standing up and saying “no more”…our institutions” are still questioning their credibility, the Senator said about the #metoo movement.

Ms Feinstein said Ms Ford wanted to initially keep her identity unknown, but within 36 hours of going public, Republicans scheduled a hearing “without talking to her”.

She said it was only because of a public outcry that her testimony was delayed. Ms Feinstein also reminded everyone Ms Ford was testifying without an FBI investigation into the claims, a procedure even Ms Hill was afforded.

In Ms Hill’s case, the Senate heard from several witnesses but Republicans are refusing to hear from anyone else in addition to Ms Ford, even the man she said was present in the room during the claimed sexual assault.

Ms Feinstein recounts the two additional accusers of Mr Kavanaugh who described what they thought was his “aggressive behaviour” toward girls.

From Andrew Buncombe who is in the building watching the hearing:

“This is not a trial for Dr Ford. This is a job interview for Brett Kavanaugh….Is he the best we can do?” Ms Feinstein said, ending her opening statement.

The clash pitted her word against his. Members of the Senate, controlled 51-49 by Trump’s fellow Republicans, must now decide whether to vote to confirm him after the extraordinary nearly nine-hour-long hearing. Senate Republicans planned to meet on Thursday night to discuss the next steps on the nomination.

“I swear today, under oath, before the Senate and the nation, before my family and God, I am innocent of this charge,” Mr Kavanaugh told the Judiciary Committee later.

“I will not be intimidated into withdrawing from this process,” Mr Kavanaugh added.

Writing on Twitter after the hearing, President Donald Trump said of Mr Kavanaugh, “His testimony was powerful, honest, and riveting. Democrats’ search and destroy strategy is disgraceful and this process has been a total sham and effort to delay, obstruct, and resist. The Senate must vote!”